Cambridge, MA – Following the substantial increase in the second quarter of 2020 (2020Q2), use of telemedicine decreased starting in 2020Q3 and stabilized in subsequent quarters. According to a new Workers Compensation Research Institute (WCRI) FlashReport, telemedicine’s share of evaluation and management (E&M) services was still higher at 3 percent in 2021Q1 as compared with 0.2 percent pre-pandemic, while the use of telemedicine for physical medicine became closer to the pre-pandemic level.

“Although COVID-19 cases in the U.S. have plateaued, it is commonly anticipated that the utilization of telemedicine will remain at levels higher than pre-pandemic,” said John Ruser, WCRI’s president and CEO. “Multiple legislative actions at the federal and state level are being debated in order to streamline the process of delivering medical services via telemedicine and regulate the reimbursement for telemedicine services. For these reasons, the utilization and prices of medical services delivered via telemedicine remain important measures to monitor in workers’ compensation.” 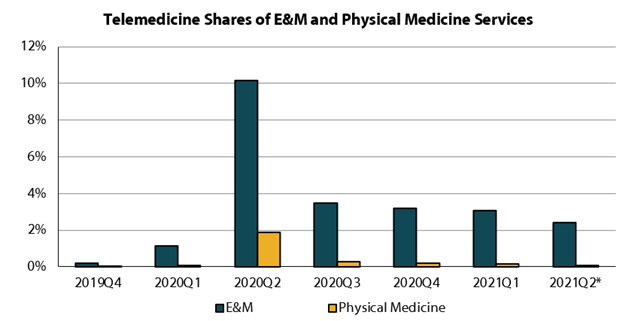 The FlashReport, Telemedicine: Patterns of Use and Reimbursement, 2020Q1–2021Q2, focuses on two types of medical services with the most prevalent use of telemedicine: E&M and physical medicine services. It investigates the patterns of telemedicine utilization among these services in workers’ compensation during the first five quarters of the pandemic (primarily March 2020–June 2021) across 28 states. It also examines the actual prices paid for the most frequent services delivered via telemedicine versus in person across the study states.

Olesya Fomenko and Rebecca Yang are the authors of the report, which is free for members and available to nonmembers for $35.

Learn more or purchase: WCRI Flashreport: Telemedicine: Patterns of Use and Reimbursement, 2020Q1–2021Q2