NCCI noted that while COVID-19 continues to be the hot topic for workers compensation in 2021, the legalization of marijuana and marijuana-related issues are also on the radar, and it is monitoring marijuana legislation in more than 20 jurisdictions and at the federal level. The report outlines key developments as of June 22, 2021.

What is the status of marijuana legalization?
Marijuana is still illegal at the federal level, but states continue to legalize marijuana in some form.

Marijuana is still illegal at the federal level as a Schedule I drug under the federal Controlled Substances Act. However, states continue to take action to legalize marijuana through legislation and ballot initiatives.

In 2021, 4 states (Connecticut, New Mexico, New York, and Virginia) passed legislation to legalize marijuana for recreational purposes. There are now 19 states, plus the District of Columbia, that have legalized the recreational use of marijuana.

Other states considered legislation to legalize recreational marijuana this year:

This year there was activity in New Jersey and South Dakota following approved ballot measures to legalize recreational marijuana in 2020:

In April, the Florida Supreme Court, in Advisory Opinion to the Attorney General Re: Adult Use of Marijuana, struck down as unconstitutional an attempt to legalize recreational marijuana in the state via a ballot initiative for the 2022 election because the court found that the language proposed in the ballot’s summary was misleading. 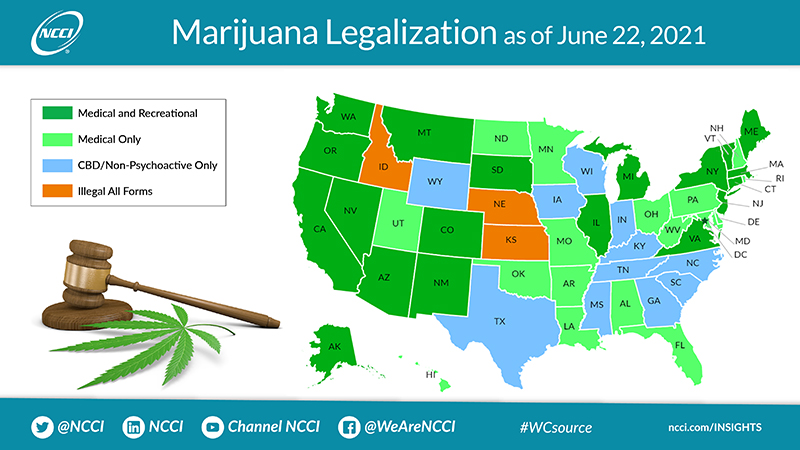