This week I want to share two articles about the brain and its incredible adaptation to life. The first article is about how the brain can change with regular aerobic exercise. The second article is about how childhood trauma changes your brain but not necessarily forever. As I’ve stated often, the brain is the most important tool for managing chronic pain and these stories exemplify that.

High-intensity Aerobic Exercises Boost Brain Neuroplasticity
A person’s neuroplasticity is the ability to form and reorganize synaptic connections in the brain in response to various experiences by pruning neural connections no longer needed and strengthening those that are. The better neuroplasticity your brain has, the better equipped you are at handling various challenges and navigating life. So how do we increase neuroplasticity? Studies show that one way is through regular aerobic exercise, which enhances brain performance.

Mark’s Thoughts:
Besides physical fitness, a regular exercise regimen helps the brain. “Studies have shown that regular aerobic exercise enhances memory, cognitive control, executive function, and attention.” The why is not totally understood but the evidence is clear that neuroplasticity increases when your “heart rates varying from 50% to 90% of their maximum…following 20 minutes of HIIT [high-intensity interval training] or 25 minutes of continuous moderate aerobic exercise.” Why is that important? “The better a person’s neuroplasticity is, the better equipped they are at facing challenges in life.” And that’s what we need—more resilience. Like I say…”Motion is Lotion.” And not just for your body but for your brain as well.

Childhood Trauma Changes Your Brain. But It Doesn’t Have To Be Permanent.
Children who suffer from severe neglect or other childhood trauma often develop behavioral and emotional problems. This article is about a study that neuroscientists at Northeastern University are conducting on rats to understand the physical changes in the brain caused by severe neglect. The researchers found that female rats developed abnormal connections in two areas of the brain in response to neglect – males did too but much later on in the process. This abnormality mimicked the brain scans of children raised in orphanages who also have suffered from neglect, abuse or other severe maltreatment. “These excess neural connections were disturbing the efficiency of that circuit…Basically, the circuit didn’t work as well, and it didn’t mature as well” which created a hyper-vigilance that led the negative behavior.

Mark’s Thoughts:
What the CDC calls ACEs (adverse childhood experiences) is called ELA (early-life adversity) in this research paper. But the conclusions are the same—bad things that happen to you in childhood can affect your adulthood. “The connections between the amygdala and the prefrontal cortex develop throughout childhood and adolescence. Research has demonstrated, however, that these connections seemed to develop abnormally in children who had experienced severe neglect and later developed anxiety-like disorders…The animals whose brains developed abnormally also behaved differently.” Every human being has some level of challenges during childhood. When they are so dramatic that they lead to ACE / ELA then behavioral changes often continue into adulthood and can be manifested as negative consequences in many ways:

“ACEs can have lasting, negative effects on health, well-being, and opportunity. These experiences can increase the risks of injury, sexually transmitted infections, maternal and child health problems, teen pregnancy, involvement in sex trafficking, and a wide range of chronic diseases and leading causes of death such as cancer, diabetes, heart disease, and suicide.

ACEs and associated conditions, such as living in under-resourced or racially segregated neighborhoods, frequently moving, and experiencing food insecurity, can cause toxic stress (extended or prolonged stress). Toxic stress from ACEs can change brain development and affect such things as attention, decision-making, learning, and response to stress.

Children growing up with toxic stress may have difficulty forming healthy and stable relationships. They may also have unstable work histories as adults and struggle with finances, jobs, and depression throughout life. These effects can also be passed on to their own children. Some children may face further exposure to toxic stress from historical and ongoing traumas due to systemic racism or the impacts of poverty resulting from limited educational and economic opportunities.”

Many of the above impact a Work Comp claim and why savvy stakeholders are increasingly willing to adopt a BioPsychoSocialSpiritual treatment model to take into context the whole-person.

But as the article’s title states, just because you had ACE / ELA doesn’t mean you’re doomed to a non-resilient, underachieving life. “The truth is, our brain continues to be plastic throughout our lives.” There are many stories of people growing up in very difficult circumstances that have not let the beginning write their life’s story. Including maybe you.

To read everything on my mind this past week, please visit me on LinkedIn.

Disclaimer: The views and opinions expressed above are those of Mark Pew, and do not necessarily reflect the views of Preferred Medical.

Mark Pew, Senior Vice President of Product Development and Marketing for Preferred Medical, is a passionate educator and agitator. Known as the RxProfessor, Mark is focused on the intersection of chronic pain and appropriate treatment, particularly as it relates to the clinical and financial implications of prescription painkillers, non-pharma treatment modalities and the evolution of medical marijuana. He is a strong champion for the workers’ compensation industry to #PreventTheMess and #CleanUpTheMess, movements he created to drive attention to the importance of individualized appropriate treatment for injured workers. Mark is a vocal advocate of the BioPsychoSocialSpiritual treatment model.

Mark serves on the IAIABC’s Medical Issues Committee and SIIA’s Workers’ Compensation Committee. In addition, he serves as technical advisor to regulators and legislators in 20+ jurisdictions on subjects such as drug formularies, treatment guidelines, Opioid Task Force initiatives, encouraging support of non-pharma treatment options and the medicinal use of cannabis. Mark received the WorkCompCentral Magna Comp Laude award in 2016 and the IAIABC’s Samuel Gompers Award in 2017. 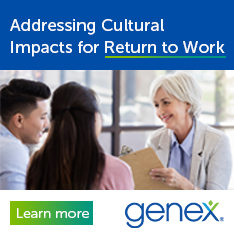