What constitutes an independent contractor versus an employee? California’s Assembly Bill 5 (AB 5) is the first piece of legislation to look at reclassifying gig workers as employees. And it’s started a national debate. Sedgwick’s Vice President Workers’ Compensation, Scotty Benton, shares his expertise.

First things first. What’s a gig economy?
Working “gigs” isn’t a new concept — people have long served as contractors, creators and craftsmen as part of a flexible workforce. The past decade, however, has seen a tremendous influx of project-specific workers; advancements with technology have opened innumerable doors to consumers who are looking for particular goods and services — and want them delivered with the touch of a button.

There are three distinct groups that make up the current gig economy:

The rise of the gig economy is demanding reform on behalf of the workforce behind it. With recent cases in California, for example, the definition of what constitutes an independent contractor versus an employee is changing. To date, the most solid attempt at shaping the definition of an independent contractor is California’s Assembly Bill 5 (AB 5).

The current state of AB 5
Effective January 1, 2020 for unemployment issues and July 1, 2020 for workers’ compensation issues, AB 5 codifies the decision in the 2018 case of Dynamex Operations West, Inc. v. Superior Court of Los Angeles and clarifies its application. Enacting a three-part test employers must use to determine a worker’s classification (learn more about the ABC test below), the bill will limit the ability of companies to classify their workers as independent contractors rather than employees. While employees receive a set salary or hourly wage, a gig worker is paid for a specific, temporary job, even if it stretches for an indefinite amount of time. The bill was borne out of concern that companies were incorrectly deeming their workers as contractors, thereby denying them certain benefits and protections.

The ABC test, which was established by the California Supreme Court, determines independent contractor status under these conditions:

Proponents of the bill are looking to give workers, previously classified as independent contractors, the same benefits employees can expect: minimum wage, overtime pay, sick leave, unemployment compensation, etc. They argue it will also protect California from losing as much as $8 billion in payroll taxes missing from an independent contractor-based structure.

Not surprisingly, though, AB 5 is hitting some resistance. Those opposed to the bill estimate an increase in labor costs of as much as 30% if companies are forced to switch their workforce from independent contractors to employees. They argue this will translate into higher costs for customers and end users, along with reduced flexibility for workers — many of whom choose to be contractors primarily for the self-governance it affords them.

In the waning months of 2019, several notable groups stepped up their fight against AB 5. These groups are actively trying to prove that their workers should fall into one of the exempt classes not affected by AB 5, and that the bill itself is in violation of the Supremacy and Commerce Clauses of the U.S. Constitution.

Rideshare leaders Lyft and Uber, along with food-delivery service DoorDash, are backing a ballot initiative to overturn the bill1; the competitors have joined forces, launching a $90 million campaign that purports the law does not apply to their workers and advocating instead for measures that maintain the flexibility of their work arrangements, while incorporating benefits like healthcare subsidies and insurance coverage for work-related accidents and injuries.

The California Trucking Association (CTA) is capitalizing on this renewed attention to AB 5 and has refiled a previously denied legal challenge that more than 70,000 independent truckers will be unable to work under the new law2.

After the bill was signed into law, the International Franchise Association (IFA) released a statement noting that the state “has upended an entire business model and thrown thousands of small business owners’ livelihoods into flux.” The IFA went on to say that they will work with similarly affected industries to “exercise all possible options, including continuing to lobby the California legislature for a common-sense exemption from this misguided policy3.”

The future of gig work — in California and beyond
AB 5 and the microscope it places on gig economy companies and workers will have a huge effect on California — an estimated 1 million workers are set to be impacted by the change to their work status. There will be major implications on most business models — especially large corporations — and nearly every industry will need time to implement the changes. To prepare, companies will need to address matters like when a gig employee is on the clock and when they’re not, how they’ll calculate wages and vacation time, and how they’ll implement benefits like sick leave and paid family leave. Without a stay, it’s expected that attorneys general and local attorneys will soon begin to sue companies found to be in violation of the new law.

Elsewhere in the U.S., the springboard bill and its ramifications are likely to have implications as well, but it’ll take time; similar legislation is now being considered in New York and New Jersey. In Washington state and Oregon, similar moves have failed to advance, but advocates are feeling a renewed momentum following the success of AB 5.

How should you prepare?
Here are four key steps employers can take now to be compliant with the new and changing gig economy regulations. 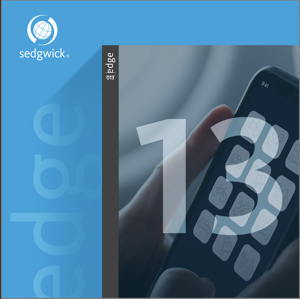 This article was originally published in the edge magazine, issue 013. The edge is a digital publication dedicated to shining a light on leading-edge industry topics that shape our collective future. Access the full edition of the edge at: edge.sedgwick.com.

About Scotty Benton
Scotty Benton is Vice President, Workers’ Compensation Practice for Sedgwick. He plays a pivotal role in helping Sedgwick drive quality initiatives and deliver optimal claims outcomes. Scotty has more than 30 years of industry experience and holds a B.S. in Business Administration from North Texas State University and an associate degree in both Risk Management (ARM) and Claims (AIC).