Raleigh, NC – The North Carolina Industrial Commission’s Compliance and Fraud Investigative Division is continuing to proactively identify businesses that do not comply with the Workers’ Compensation Act at an unprecedented rate. Over the past several years, the Commission has worked to develop this Division, which is responsible for working with businesses to ensure that adequate insurance is maintained, and to identify noncompliant businesses using an advanced data-matching application named the Noncompliant Employer Targeting System (“NETS”). This database analyzes data from partnering state agencies to determine if a business is reporting three or more employees, and whether they have workers’ compensation insurance coverage.

The NETS program recently received a significant upgrade to ensure that the application is utilizing the most accurate and current data available.

The Fraud Investigative Unit operates as a law enforcement agency, and is responsible for conducting criminal investigations into cases of suspected workers’ compensation fraud and violations related to workers’ compensation claims. As a result of their investigations, the Commission issued 412 total charges for suspected violations of the Workers’ Compensation Act in Fiscal Year 2016-2017, up 275% from 150 total criminal charges in the previous Fiscal Year, with just one charge against an employee. Notably, an alleged scheme to scam two insurance companies for more than $150,000 in workers’ compensation claims based on policies issued to fake businesses was recently exposed and stopped in its tracks by Fraud Investigators of the Industrial Commission. One man was arrested and charged with four felony counts in conjunction with the scheme.

“Violations of the Workers’ Compensation Act can have significant impact, whether it be to the families that are directly affected or to the public who may feel the impact of related costs being passed on to them” said Director Bryan A. Strickland, “This is a serious issue and we can’t alleviate it all on our own. If people encounter any suspicious activity regarding Workers’ Compensation, they can feel confident our dedicated team is on their side and ready to help.” 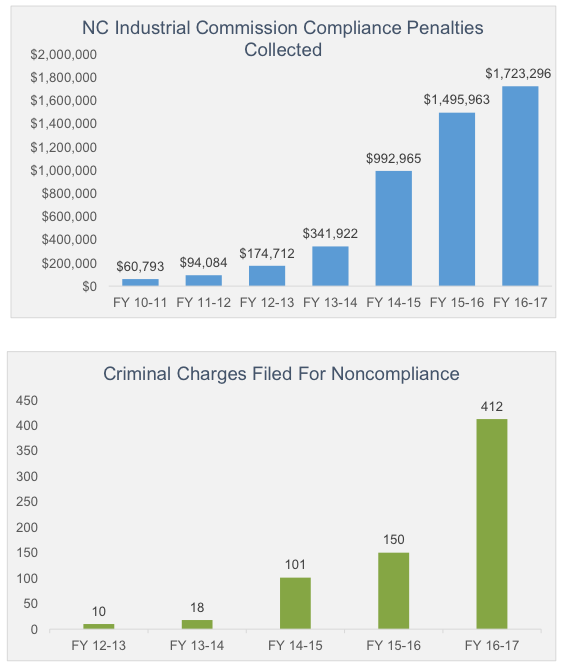 A fraud complaint checklist is available online at http://www.ic.nc.gov/fraud.html#fraud. To report a case of suspected fraud or noncompliance, people may contact investigators in several ways: