In what seemed at times to be a herculean effort by Assembly Member Henry Perea and his staff, the California Legislature passed AB1124 in the waning minutes of the 2015 legislative session, helping smooth the way for the development of a drug formulary to guide the treatment of injured workers in California.

The journey for AB1124 began earlier in this year’s session. The bill, as initially introduced, was an uncomplicated, two-line bill that simply stated that the Administrative Director of the Division of Workers’ Compensation shall establish a drug formulary. Simplicity is not a hallmark quality of the political process. Once the bill was scheduled for a committee hearing, the legislative process began.

In the first committee hearing, the bill was amended to require a committee of specified stakeholders to aid in the process of developing the formulary. The amendment called out various professionals who should be on the committee, raising the concern of those stakeholders who weren’t mentioned. And by the end of the hearing, the bill had expanded to 12 lines. As the legislation advanced to the Senate, it was subject to additional amendments, many of which crossed into more detailed guidance on transitioning injured workers from potentially dangerous medications, and suggesting the addition of more stakeholders to the formulary development committee. Other amendments tried to address the conditions for prescribing off-formulary. When AB1124 finally landed in the Senate Appropriations Committee, it had been heavily burdened by amendments. The bill was now three pages long, there was no consensus among stakeholders, and there were provisions in the language that created concern for the Division of Workers’ Compensation.

Prior to the summer break, the bill was languishing in the Senate committee. California Labor Secretary David Lanier, in what appeared to be an effort to break the logjam and to insulate the bill from what some would classify as unfriendly amendments, announced at the annual conference of the California Coalition on Workers’ Compensation that whether the legislation passed or not, the Division of Workers’ Compensation (DWC) had the authority to move forward with the development of the formulary. Moreover, the DWC would start immediately. This announcement was the impetus for stakeholders to reach consensus on the bill.

Assembly Member Perea convened a small working group tasked with meeting over the summer break and working out a consensus bill. The committee was staffed by Jose Torres and Minnie Santillan from Perea’s office, and included representatives from insurers, employers, medical providers, labor, and applicant attorneys. Helios was invited to be a part of the group. Representatives from the Official Disability Guidelines (ODG), the American College of Occupational and Environmental Medicine (ACOEM) and other care management companies also attended meetings, as did the Department of Industrial Relations and the DWC to hear stakeholder comments and concerns. The working group met a number of times and walked through dozens of versions of language before reaching a hard-fought consensus.

Our experience in Texas, Oklahoma, and other states provided valuable insight to the group. Critical points driven home by our team during the meetings were the value of Pharmacy Benefit Manager (PBM) clinical tools in supporting the formulary, making sure appropriate medications were being prescribed in accordance with established treatment guidelines, creating effective gatekeeping measures to contain the use and cost of compounded medications, and the pros and cons of the various pathways for developing or adopting a formulary.

Minnie and Jose were masterful in guiding the working group to a resolution and helped the group stay away from provisions that might trigger a veto by the Governor. There were several “agreed-upon” versions that were printed before the group finally settled on the version that passed in the Senate on September 4, 2015, and was placed on the Senate third reading calendar. The final version provides valuable guidance to the Division on critical areas they should consider when developing the formulary, while holding fast to the importance of making certain that medications prescribed are medically necessary and related to the proper treatment of a workplace injury. To the working group’s credit, during the discussions, the primary focus was to make certain that injured workers received appropriate medications to aid in their healing process.

In one of the interesting twists of political maneuvering, the final vote for AB1124 in the Senate was delayed because of action on another unrelated piece of legislation. Political alliances and adversaries frequently shift based on particular issues. In the case of AB1124, critical Senate votes were being held in reserve as another volatile issue percolated through the Assembly. The Senators waited to see how Assembly Member Perea voted on their bill before casting their vote on AB 1124. After a successful resolution of that bill, AB1124 was voted out of the Senate late on September 11th and ordered to the Assembly for a vote on concurrence with the Senate amendments. In the wee hours of Saturday morning, September 12th, just minutes before the final gavel fell on the 2015 Session, the California Assembly voted to concur with the Senate amendments to AB1124 and the bill was off to the Governor’s desk for signature. It is anticipated that the Governor will sign the bill since Assembly Member Perea worked closely with his office to avoid any problematic language.

Some may ask why all the fuss over the bill if the Division already has the authority to craft a formulary. That is a legitimate question that begs an answer since many stakeholders put in long hours working on language and architecting a compromise. The bill matters because the voice of the people through their legislature matters. The legislature, reflecting the voice of the people, has set forth the importance of the formulary and provided some guiding principles to help get it right. Moreover, AB1124 contains provisions that will allow for an expedited approval process for adding or removing medications after the formulary is adopted, making sure that good medications are quickly available and barriers are in place as soon as a medication is determined to be problematic. Additionally, it matters for all stakeholders that the legislature has weighed in and provided guidance, establishing a long-held method of checks and balances on executive branch actions. Finally, it matters that Assembly Member Perea, in his wisdom, brought together the diverse interests, set us in a room together, and gave us a chance to privately air our fears, concerns, and hopes for the formulary, and to help us find points of agreement from which we can build a solid and effective drug formulary in California.

Those points of consensus were evident at the first public forum addressing the formulary held on September 8, 2015. The Division introduced the basic concepts and then did a lot of listening. At this point, the bill had not yet passed, but the process and outcome of the legislation was duly noted in the forum. We participated in the forum and spent a lot of time talking about Texas, Oklahoma, and other states that have ventured into the formulary waters. In the end, there was general agreement on the broader concepts, but there are still a lot of details that will need to be worked out, such as how pre-authorization will work, what documentation is needed to justify off-formulary prescribing, how to best transition the legacy claims, and how the formulary itself will be developed, along with a host of other things. Time will tell if the consensus-building attitudes spawned in the committee rooms in the capitol over the summer break will carry into the long process of putting the nuts and bolts together for the formulary.

A state-based formulary is a great gatekeeper to help keep the more problematic medications out of the workers’ compensation system. Coupled with the tools provided by a good PBM, a formulary can ensure that an injured worker receives the right medication, at the right time, for the right reasons. The Division has said all along that it wants to get this right, but they need the workers’ compensation stakeholders’ best and brightest to share our ideas and experiences to help them get there. Administrative Director Overpeck is actively seeking constructive input from the various interests to help the Division shape the drug formulary development. The inside-baseball game has been played at the legislature and we were thrilled to be a part of it. But now the politics enters the very public rulemaking process. This is your chance to make a difference in California.

Looking beyond the Golden State, several other states are traveling a journey towards a formulary.

The Louisiana Office of Workers’ Compensation has been considering a drug formulary for more than a year, sparking a bit of controversy in the process, particularly among applicant attorneys and treating physicians. As of the most recent Advisory Council meeting, however, it seems stakeholders are willing to work together in crafting a solution that balances the considerations of payers, employers, pharmacy benefit managers, and physicians while keeping the best interest of the injured worker at the forefront. Meanwhile, in Tennessee, the Bureau of Workers’ Compensation continues their journey towards a state-specific drug formulary. Following the public hearing held August 25, the Bureau is currently evaluating comments it received, carefully scrutinizing the recommendations to make sure the rule reflects the best approach for employers and employees alike. One can only wonder what twists and turns are ahead before the respective rules and legislation ultimately pass. 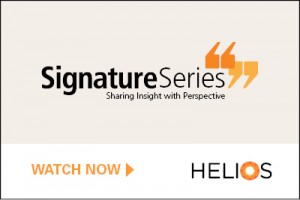 In our latest SignatureSeries segments, Brian Allen, vice president of government affairs sat down with Abbie Hudgens, administrator for the Tennessee Bureau of Workers’ Compensation and Patrick Robinson, director of the Louisiana Office of Workers’ Compensation to discuss their experiences in pursuit of a state-specific formulary for their respective jurisdiction.
Click here to learn more.

Helios brings the focus of workers’ compensation and auto no-fault Pharmacy Benefit Management, Ancillary, and Settlement Solutions back to where it belongs – the injured person. This comes with a passion and intensity on delivering value beyond just the transactional savings for which we excel. To learn how our creative and innovative tools, expertise, and industry leadership can help your business shine, visit www.HeliosComp.com.