Society is aware of the risks of misuse, abuse, addiction, overdose, and even death that come with the use of opioid analgesics. The statistics are alarming with 46 people dying from an overdose of prescription painkillers in the U.S. every day. Yet many overlook how chronic pain and opioid analgesics can affect the systems in the body. 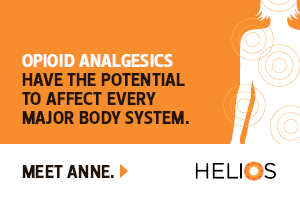 To help further illustrate the impact that opioid analgesics can have on the body’s systems, click here to learn about Anne, a 45-year-old woman who was injured at work. Over the course of her claim, she was prescribed multiple medications, including several opioid analgesics. Her story highlights what can be overlooked in the process of handling a claim and emphasizes the importance of working with a PBM such as Helios.

Helios brings the focus of workers’ compensation and auto no-fault Pharmacy Benefit Management, Ancillary, and Settlement Solutions back to where it belongs – the injured person. This comes with a passion and intensity on delivering value beyond just the transactional savings for which we excel. To learn how our creative and innovative tools, expertise, and industry leadership can help your business shine, visit www.HeliosComp.com.