Orlando, FL – The United States wasted $418 billion in 2012 based on bad medication-related decisions, and the impact was most deeply felt in those states that could least afford it, according to new research from Express Scripts (NASDAQ: ESRX).

While these costly decisions impact the entire nation, the analysis shows that they have a disproportionate effect on the poorest states. Mississippi, which has the lowest median household income in the country, had the most wasteful spending, totaling $1,622.76 per resident. The other low-income states that top the list in unnecessary pharmacy-related costs include Louisiana, Arkansas, Alabama, Kentucky, Tennessee, South Carolina, New Mexico and Oklahoma.

“Our nation pays a huge price for bad medication-related decisions, and it is clear that the price is even more costly for those at the lowest end of the economic spectrum,” said Steve Miller, MD, chief medical officer at Express Scripts. “The good news is that our country can save billions of dollars for patients, employers and the government – and achieve healthier outcomes – simply by driving better decisions within the pharmacy benefit.” 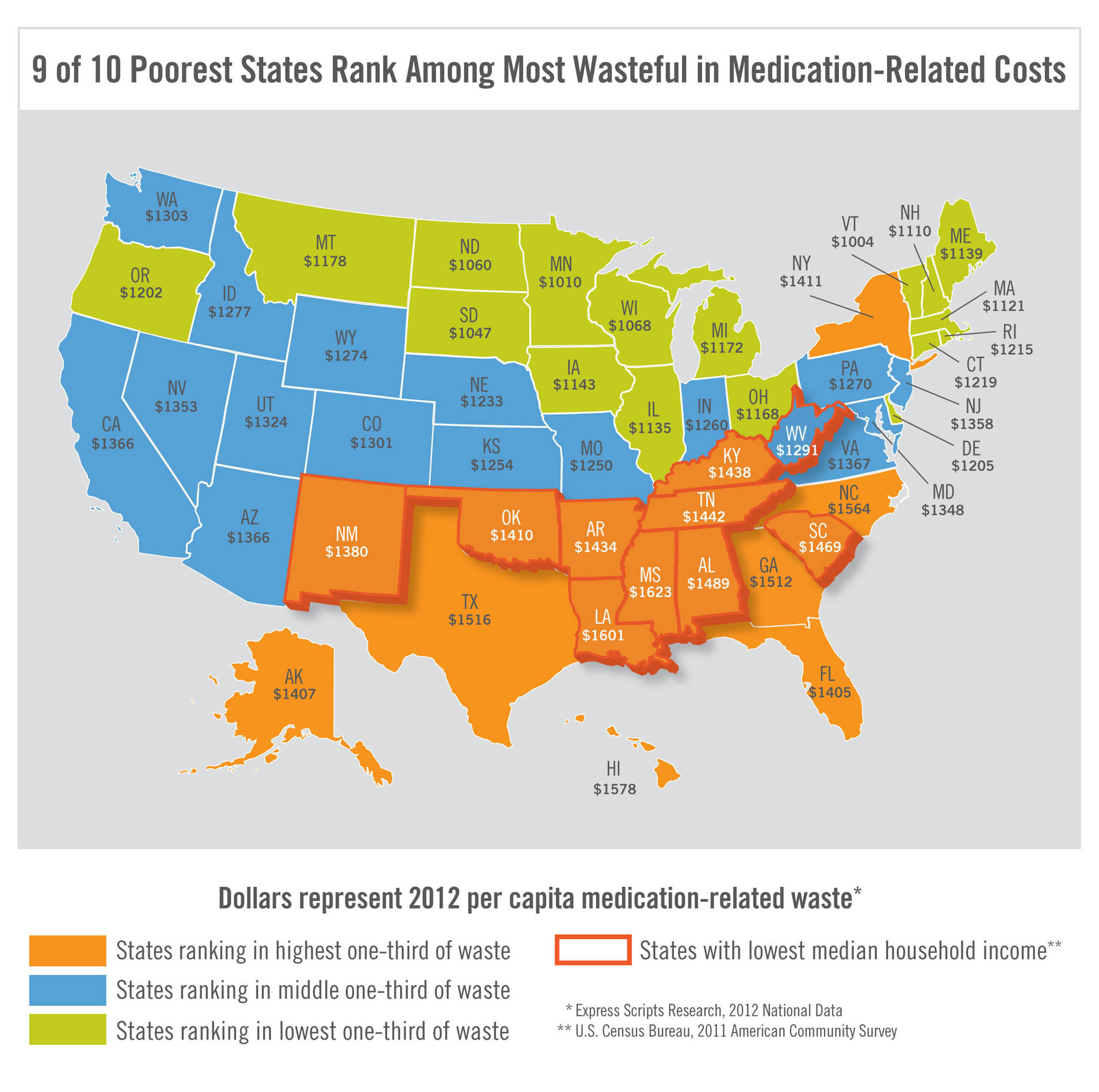 Waste was defined as extra medication-related spending that provided no additional clinical benefit. This includes the use of high-priced prescription drugs and pharmacies when clinically equivalent or superior alternatives existed, as well as unnecessary medical expenses that could have been avoided by patients adhering to their medication therapies.

The research, recently presented at the Express Scripts Outcomes Symposium in Orlando, Florida, revealed the following:

According to the research, the most wasteful one-third of states spent between $1,404.82 and $1,622.76 per capita in avoidable costs. States with high levels of waste were found to be primarily located in the southern region of the country – an area also associated with higher rates of chronic disease. States with the lowest levels of avoidable costs were predominately in the Midwest and Northeast. Vermont wasted the least amount per capita among all states in the U.S., yet still experienced an average of $1,004.39 in unnecessary costs per resident.

“It’s hard to believe, but when we consider associated medical expenses, bad pharmacy-related decisions waste more money than what the country spends in total on prescription drugs,” said Dr. Miller. “To help eliminate these unnecessary costs for the country, Express Scripts has aligned its solutions to enable patients to make better drug choices, pharmacy choices and health choices.”