Treatment of chronic pain cases with chronic opioid therapy has created a costly conundrum for patients, providers and payers.  As a chronic pain management involves a complex interaction between  somatic, visceral and neuropathic pain with multiple psychosocial comorbid factors, physicians use multiple treatment approaches to manage chronic pain, including: medications, physicial therapy, exercise, massage, psychological interventions, injections, neural blockades, implantable devices, surgery, and other alternative approaches.  One of the primary treatments today is the use of opiate analgesics in the management of chronic pain.    Increasingly, we are seeing that chronic opioid therapy in non-cancer patients has created numerous problems.  Some of the problems associated with chronic opiate therapy include: lack of evidence of the effectiveness of chronic opiate therapy, increased tolerance of opiates and resultant increased pain sensitivity, complex hormonal effects, as well as depression and suppression of the immune system.   Combine these side effects with the vast number of people that experience these effects (51% experience at least one adverse effect according to the American Chronic Pain Association ) and the skyrocketing costs of these drugs and the importance of the issue becomes clear.

NCCI reports that 20% of workers’ compensation medical costs of fully developed claims are spent on prescription drugs with narcotics accounting for 34% of this spend—80% of which is long term (after the first six years).   This indicates that prolonged use is pervasive and the associated costs are catastrophically high.

This paper focuses on the use of narcotics in treating chronic pain (chronic opioid therapy).  Chronic pain is defined as pain that lasts three or more months or, beyond the expected healing phase of the injury that produced the pain.. As mentioned above, the types of pain that can result from this injury include: somatic pain, visceral pain, neuropathic pain, as well as pseudoaddiction pain that is related to chemical coping behaviors.

Opioids and How They Work

Opioids can be natural or synthetic.  Naturally occurring opioids are derived from opium and include morphine and codeine.  Synthetic opioids can be partially synthetic such as hydrormorphone, oxymorphone and oxycodone, or wholly synthetic such as levorphanol, fentanyl, methadone, propoxyphene and meperidine.  Most opioids are classified by the United States Drug Enforcement Administration as Schedule II drugs because of their highly addictive nature.  (Heroin, for example, is a Schedule I opioid on the I-V scheduling spectrum, whereas fentanyl, hydrormorphone, pure hydrocodone, pure codeine and morphine are classified as Schedule II drugs.)

These highly addictive drugs work by binding to pain receptors in the brain, spinal cord and other parts of the body.  In fact, opioids follow the same pathway responsible for “rewards.”  The same reward pathways activated when a person receives positive reinforcement (“reward”) for certain behaviors, are also activated by opioids.  Natural rewards such as food, water, sex and nurturing are required for the survival of the species.   Opioids replicate what nature has programmed—positive reinforcement—which forms the foundation of their addictive nature.

A person activates the reward pathway when taking an addictive drug because these drugs increase dopamine levels in a very specific area known as the nucleus accumbens.   Scientists have been able to measure brain neurotransmitter levels in this part of the brain in lab animals that have become addicted to drugs.
In the landmark Science article published in 1997 entitled “Addiction Is a Brain Disease, and It Matters,” Alan Leshner, a former director of NIDA wrote:  “Scientific advances over the past 20 years have shown that drug addiction is a chronic, relapsing disease that results from the prolonged effects of drugs on the brain.  As with many other brain diseases, addiction has embedded behavioral and social-context aspects that are important parts of the disorder itself.”

This is a core concept in addiction medicine.  With neural networks and pain sensory systems communicating with other brain pathways involved in emotions and cognition, there is considerable overlap between chronic pain and addiction.  This overlap makes chronic pain, in the context of addiction, a very complicated biopsychosocial disorder.

Given that opioids are so addictive, one might ask why the drugs are used on such a prolonged basis.  This line of questioning is not new.  In fact, it dates date back to the 1800s when prominent physician Clifford Abbot wrote, “At such times I have certainly felt it a great responsibility to say that pain, which I know is an evil, is less injurious than morphia, which may be an evil.  Here experience is needed.  Does morphia tend to encourage the very pain it intends to relieve?”

Scientists have studied the links between the use of opioids and increased pain a great deal.  And, as research mounts, opioids—especially long term use of opioids—has come under increasing criticism.
However, many physicians still favor the use of opioids.  Physicians using opioids often base their use on the belief that  the pain relief opioids provide is superior to that provided by other analgesic medications (even if these have not been tried).

The American College of Occupational and Environmental Medicine recommended the following guidelines  for appropriate use:
• Opioids should be used in acute musculoskeletal pain only when there is significant objective evidence of injury, when other medications such as NSAIDs and acetaminophen are contraindicated or on a very limited basis if other medications have failed to control pain in the short term (up to 3 weeks after acute injury).

• In chronic pain, in infrequent instances, short-term use of an opioid may occasionally be helpful during the initial active physical rehabilitation of persons with objective evidence for de-conditioning, increased pain with exercise, and (fear avoidant) chronic pain behavior during initial therapy to facilitate physical activation if other means of temporary reduction in the musculoskeletal pain that increases with exercise, such as heat, acetaminophen or NSAIDs, are ineffective. In that setting, the judicious, short-term use of one non-combination, short-acting narcotic like oxycodone or codeine may be indicated.  A maximum duration of four weeks is suggested.

• In rare situations when a patient derives clear functional benefit from opioid use, continued use may be indicated with careful management.

Today more is known about those at greater risk for developing chronic pain and opioid abuse problems.  Long held beliefs about conditions said to be predictive of narcotic abuse and chronic pain such as high analog scale ratings (e.g. 10/10), use of multiple pain descriptors, poor perceived coping skills and a history of being treated by many providers, are now being replaced with a larger fact base within the literature.
The incidence of opiate addiction in the general population is estimated to range from 3-16%.  The incidence of aberrant drug use behavior is estimated to be much higher in the chronic pain population.  Risk factors for aberrant drug use include:personal or family history of alcohol abuse, nicotine dependency, under 45 years of age, depression, impulse control problems (ADD, bipolar, etc), hypervigilant states (PTSD), personality disorders, somatoform disorders, pain after motor vehicle accidents, and pain involving more than three regions of the body.

So what can be done?  We know that pain is a very subjective experience, and chronic pain is deeply intertwined on a biological, psychological and social level with addiction.  We know that some people are more likely to become addicted.  Are the American College of Occupational and Environmental Medicine guidelines enough?  What should be done for those more likely to become addicted or for those already addicted to their prescription medications?

To address the complexities of chronic pain and opioid abuse, the best studied evidence-based treatment for chronic pain is biopsychosocial.   Overreliance on a strictly biomedical approach results in overutilization of medical technologies, delayed treatment of co-morbid conditions that contribute to pain, adverse treatment-related consequences and poor clinical outcomes. 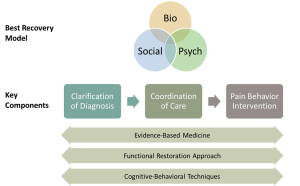 Studies have proven evidence-based, multidisciplinary treatment of chronic pain to be most successful.  No other approach has consistently demonstrated positive outcomes with respect to return to work, decreased healthcare utilization, reduction of opioid medication use, increased function and reduced disability claims.

However, success requires a motivated individual and a skilled treatment team willing to work within the biopsychosocial model.  One must clarify the diagnosis, ensure the right care and match the proper interventions with the right circumstances.

It is imperative to clarify the diagnosis using objective criteria and not the highly variable self-report.  When one alternatively measures the problem using a subjective pain rating, the psycho-social influences will likely be intermixed and all pain, regardless of cause, will be reported together.

To clarify any inconsistencies one needs to ask questions such as:
• Is the diagnosis confirmed with objective findings?
• Were controversial diagnostic criteria used?
• Are behavioral and/or emotional factors contributing to prolonged recovery?
• Are any additional evaluations needed?

Once clear on the issues, coordination of the right care becomes the priority.  Appropriate providers will emphasize functional restoration over an interventional approach.  Additionally, they will use evidence based medical guidelines and cognitive/behavioral techniques to move the focus of control and responsibility back to the injured worker.

Those influencing the course of the claim can help ensure that the patient sees the right types of providers—experts that address behavioral factors and coordinate a care plan that addresses the emotional, motivational and other secondary issues.

Another key role in managing the patient is monitoring the interventions that are being prescribed.  In this regard it is often helpful to have the support of independent pain experts (such as Paradigm) to help prevent addictive medication abuse, ensure that prescriptions are within proper clinical guidelines, and consult on the appropriateness and options surrounding surgeries and costly procedures.

The goal in monitoring interventions is not to deny care, medication or procedures, but to understand the circumstances under which the interventions will be successful and when other types of care (e.g. behavior therapy) will prove more useful.

Paradigm’s Systematic Care ManagementSM incorporates all the elements outlined in this article:  a biopsychosocial orientation, consistent use of evidence-based medical guidelines and systematic use of the three core management components (diagnosis clarification, coordination of care and informed monitoring of interventions).  Evidence that Paradigm’s methodology delivers outstanding outcomes is shown in figure 1 (early intervention) and figure 2 (later stage intervention).

Figure 1 illustrates Paradigm’s success in returning the employee to work when allowed to manage the case just as the individual begins to exhibit chronic pain warning signs. 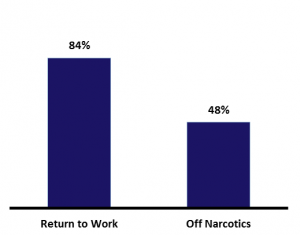 Figure 1.  Early Referrals (less than one year from date of injury)

The later stage results shown in figure 2 demonstrate how the right approach can even impact later stage cases referred for medical management an average of six years from the date of injury. 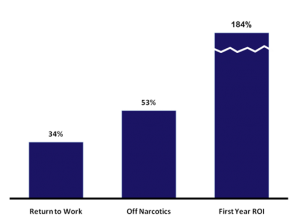